These blood drives are organized by local survivors and patient advocates who required blood transfusions in order to survive childbirth. Here are a few of their stories: 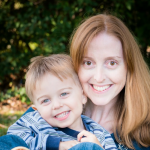 I am a survivor of multiple pregnancy complications: placenta increta, incompetent cervix, and intraoperative hemorrhage. I had several risk factors for accreta including several D&Cs, hysteroscopies, and advanced maternal age. Placenta accreta was suspected in my third trimester and I was immediately transferred to a hospital that could handle this serious condition. I was kept on hospital bed rest and monitored for bleeding and contractions. My son was born with a huge team of top medical experts supporting the complicated surgery, planning for the absolute worst case scenario: bleeding to death. During surgery I lost approximately five pints of blood, half of the blood in my body, and had to have a hysterectomy to stop the bleeding and save my life. I was awake during the surgery and specifically remember the frantic call to the blood bank for blood. I survived because of a blood transfusion – because of the generosity of others. More details about my patient story can be found on National Accreta Foundation’s website. 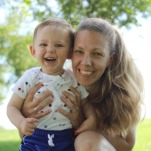 It would be an understatement to say I had a challenging pregnancy and postpartum, dodging death not once, but twice. When I was 24 weeks pregnant, I was diagnosed with bilateral pulmonary emboli after an incident at work left me gasping for breath. Then a week after an emergency c-section delivery, my husband rushed me to the ER where we learned I was hemorrhaging internally. I received twenty-two units of packed red blood cells, plasma and platelet transfusions — more than my entire blood volume — to stabilize my condition so surgeons could repair six different bleeding locations. In total, my surgeons removed five liters of blood and clots from my abdomen. Going through two near-misses has been eye opening. I didn’t know the rate of maternal mortality was rising in the United States while it was declining in other wealthy nations. I also didn’t know that new mothers are one of the largest groups of people requiring blood transfusions until I became one of them. Now, I want to use my experiences to raise awareness of perinatal complications and the enormous, endless need for blood donations. Since my near-misses, I have had many opportunities to speak and write about the maternal health crisis, including co-authoring Nobody Told Me About That, a book aimed at helping new families navigate the first six weeks of postpartum. In addition to hosting blood drives, I co-lead a peer-to-peer support group for Postpartum Hemorrhage Survivors and blog about my experience at The Heart of Home. 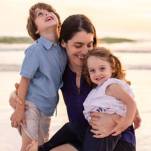 I’m a survivor of undiagnosed placenta increta. I had a full-term normal pregnancy and delivery with my daughter, and we went home from the hospital a happy and healthy family of four. I didn’t have any of the common risk factors for accreta other than advanced maternal age. I had never had a c-section and it was my second pregnancy. It wasn’t until the day after I was sent home from the hospital that I realized something wasn’t right. I met my doctor at the ER and he scheduled a D&C for what was suspected to be retained placenta. I hemorrhaged during the D&C and required 10 units of blood products and a lifesaving partial hysterectomy. I woke up in the ICU and then learned all that had happened. I am so grateful for the blood donations and care I received and the system that was in place to save my life.

I am a survivor of postpartum hemorrhage after what seemed to be an ideal pregnancy. I wasn’t high risk, I had no detected issues, and my pregnancy was a relatively smooth journey. After going through a long (46 hours) & hard labor (4 hours of pushing, presence of meconium, failure to descend, etc) we delivered our baby via c-section. I was awake & elated to finally have her out safely. I experienced typical blood loss during the cesarean but was stitched up and returned to the L&D room to do skin to skin. While the nurses were performing a post OP abdomen exam I began to feel excruciating pain in my abdomen and soon in my shoulder. As my body began to go into shock I was rushed back into the operating room. The surgeon discovered massive amounts of blood loss & a tear in my uterus that they couldn’t repair. Ultimately they had to remove my uterus and transfuse 8 units of blood to keep me alive. But I am here and so grateful to my donors who allowed me to live!

During the birth of my son, I survived an Amniotic Fluid Embolism, a rare and often fatal obstetrical complication. As I was preparing to push, I stopped breathing and experienced cardiorespiratory arrest. My son was delivered during an emergency c-section while CPR was initiated on me. My heart stopped twice. I then went into DIC, a condition that keeps your blood from clotting. I required ECMO, a form of life support, to survive. After 4 abdominal surgeries in 3 days, including a hysterectomy, I was taken out of sedation and conscious for the first time in 5 days. I was finally able to meet my son. I spent 2 weeks in the ICU before going home to finish my recovery. During my AFE, I required a total of 143 units of blood product in order to save my life. I will forever be grateful to the amazing donors who unknowingly saved my life that day. I would not be here without them. I will spend the rest of this second chance at life doing everything I can to bring awareness to AFE and moms’ needs for blood donations. If you want to learn more about AFE, please check out afesupport.org.

If you are interested in becoming an Ambassador in your region, learn more here.

Thinking about hosting a blood drive? We can help you get started. Download our toolkit HERE.